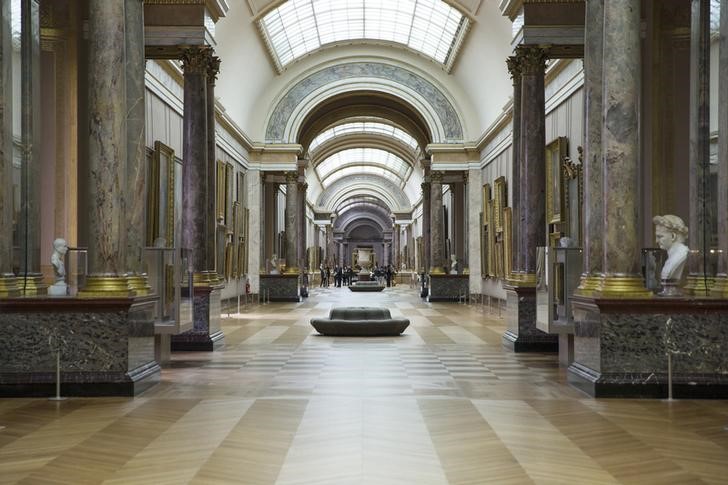 Image: A view shows a wing of the Louvre Museum emptied from its visitors during a visit by French President Francois Hollande, King Willem Alexander and Queen Maxima of the Netherlands (not seen) in Paris, France, as part of their State visit to France March 10, 2016. REUTERS/Etienne Laurent/Pool

By Richard Lough and Morade Azzouz

PARIS (Reuters) – The Louvre and Orsay museums in Paris moved scores of artworks and precious artefacts to safety and soldiers evacuated residents trapped in some of the French capital’s suburbs as the rain-swollen river Seine hit its highest level in 30 years.

The worst affected areas lay just to the south of the capital. In Villeneuve-Saint-Georges near Orly airport, soldiers and Red Cross volunteers helped stranded residents as flood waters rose above knee level. In nearby Corbeil-Essonnes, locals kayaked along streets littered with abandoned cars.

“It’s a bit frightening, everything that’s happening,” said one woman from Marseille who identified herself only as Odile. “Not long ago they ran a flood simulation, how to evacuate museums, residents. And now it’s happening for real.”

The heavy flooding of the past week could cost French insurance companies some 600 million euros ($680.5 million) or more, industry association AFA said.

Both the Louvre and Orsay museums overlooking the Seine were closed to the public on Friday. In the Louvre, workers stacked dozens of boxes marked fragile and containing valuable statues, vases and artworks. Crates could be seen stacked in corridors, overlooked by classical marble statues.

“For the museums, even if fortunately there isn’t any flooding of storerooms as of today, there is an automatic process above 5.50 metres to move works in the deepest storerooms higher,” Bruno Julliard, Paris’ deputy mayor, told France Inter radio.

The Louvre and the Musee d’Orsay are both home to world-renowned art collections, the former including the celebrated Mona Lisa painting and Venus de Milo statue.

Even as the Seine crested higher, it remained well below the record high of 8.6 metres reached in 1910, when thousands of Parisians had to flee inundated low-lying areas of the city.

Officials said the river could peak at 6.50 metres later on Friday, and warned flood waters could take several weeks to recede after the wettest May in France for 100 years.

The retreating waters could reveal further victims, she added.

In Evry-Gregy-sur-Yerre, a man on horseback drowned on Thursday, becoming the first fatality from the flooding caused by days of unusually torrential rain.

A women was found dead on Friday after having drowned in a river located in the Loiret department, central France, the local prefecture told BFM television.

Prime minister Manuel Valls told journalists the death of a woman on Wednesday was not linked to the flooding, as earlier thought.