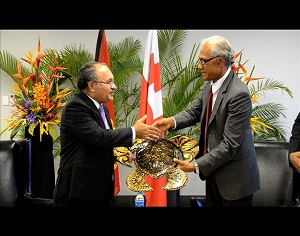 Papua New Guinea has reaffirmed its commitment to assist the island Kingdom of Tonga in hosting the next Pacific Games in 2019.

PNG has also offered to lend its expertise at the request of the Tongan government.

Pohiva was accompanied by a delegation which included Tonga’s CEO for Sport and Minister for Internal Affairs.

In a closed-door meeting, both Prime Ministers exchanged gifts and discussed matters of mutual interest.

“Tonga does not have the financial and technical capacity to host the sport,” Pohiva said.

Prime Minister O’Neill announced that the PNG government would lend a helping hand.

“Today, I want to on behalf of the Papua New Guinea government, state that Papua New Guinea will support the Tongan government in the hosting of 2019 Pacific Games. This is a commitment we made at the last 2015 Games that we hosted,” O’Neill announced.

O’Neill said Tonga is in a similar situation to where PNG was, where it inherited from the previous government the task of hosting the regional games. He said PNG has experience in delivering the games under difficult circumstances.

“As a country we have the experience in hosting games as such under difficult circumstance. We have offered them that we will give them the expertise that they require. Some of the management of our South Pacific Games will be available at request from the Tongan government; if they require, we will assist them,” O’Neill said.

PNG has also offered to rebuild the main stadium, which will be hosting the track and field events in the capital Nuku’alofa. PNG will also assist to build a High Performance Centre.

The Tongan Prime Minister was grateful for the pledge of assistance.

The delegation from Tonga will depart PNG tomorrow, having visited sports facilities in Port Moresby.

When asked about the monetary value of Papua New Guinea’s assistance to Tonga in hosting the 2019 Pacific Games, the Prime Minister said a final decision will be made following recommendations from an assessment team which will travel to Tonga.