Papua New Guinea has risen 14 places overall in the World Bank’s annual ‘Ease of Doing Business’ report, primarily due to improvements in starting a business and getting credit.

Other Pacific countries ranking higher are: Fiji (97th), Samoa (89th) and Tonga (85th). New Zealand is ranked number one for doing business around the world.

The rankings are based on 10 criteria: 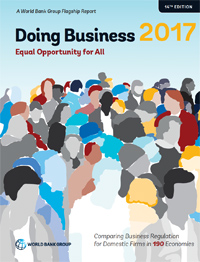 The President of the Lae Chamber of Commerce and Industry, Alan McLay tells Business Advantage PNG that the statistics primarily reflect the ease of doing business in Port Moresby, rather than the rest of the country.

‘The facts and figures for PNG are all gathered in Port Moresby and hence do not take into account that it might be easier to obtain trading licences, for example, in Mt Hagen or Lae as opposed to Port Moresby.

‘According to data collected by Doing Business, starting a business in PNG requires six procedures, takes 41 days, and costs 15.6 per cent of income per capita.’

‘However, improving the sad figures on PNG is a good thing, as PNG has been in decline on this index for the past 10 years.

‘I think a lot of the turnaround is due to the improvement in the IPA [Investment Promotion Authority], where there has been a lot of work put into registering companies and obtaining information about them.’

The two areas of improvement nominated by the report are: starting a business (130th, up from 136th last year) and getting credit (32nd, up from 109th last year).

‘One factor that has improved access to credit in PNG is the operation of a new private credit bureau.’

According to data collected by Doing Business, starting a business in PNG requires six procedures, takes 41 days, and costs 15.6 per cent of income per capita.

The credit for the increase in ranking in this criteria is the reduced time required to start a business that has occurred because of the streamlining of business registration procedures at the IPA.

The Doing Business report notes that when economies strengthen the legal rights of lenders and borrowers under collateral and bankruptcy laws, and increase the scope, coverage and accessibility of credit information, they can increase entrepreneurs’ access to credit.

The report says one factor that has improved access to credit in PNG is the operation of a ‘new private credit bureau’ (presumably, the Credit and Data Bureau), which has improved the provision of relevant information.

‘The new law broadens the scope of assets that can be used as collateral.’

It says Papua New Guinea has also adopted a new law on secured transactions. This has led to the implementation of a ‘functional secured transactions system’ and the establishment of a centralized, notice-based collateral registry [the Personal Property Securities Act Registry].

‘The new law broadens the scope of assets that can be used as collateral and allows out-of- court enforcement of collateral.’