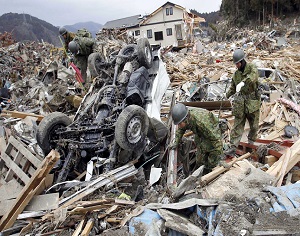 Image: Members of Japan’s Self Defense Force search for survivors in an area hit by an earthquake and tsunami in Rikuzentakata, Iwate prefecture March 15, 2011 file photo. REUTERS/Toru Hanai/Files

By Elaine Lies
RIKUZENTAKATA, Japan (Reuters) – Time has done little to help Japanese volunteer fireman Eiki Kumagai with memories of March 11, 2011, when he clung to some steps as a huge black tsunami surged through his town, washing away people he knew as they cried for help.

“We were recovering bodies,” the 48-year-old recalls. “This is a small town, we knew them all. Women, children, old people. There were so many, we had two layers.”

Five years after Rikuzentakata lost 7 percent of its population and its entire downtown to the 15 meter (49 ft) wave touched off by a magnitude 9 earthquake, a huge construction project has raised its center from future waves.

But while the physical landscape has been changed for the better, emotionally many people in the town of 20,000 remain frozen in grief and psychologists say it may take several generations to ease the trauma fully.

“The year of the tsunami, I was angry at the wave,” said Kazuo Sato, a former oyster fisherman who can still barely look at the sea. He lost 100 friends and relatives.

“What’s left is regret, and that’s getting worse. We could have saved so many more people.”

The town center has been transformed with 5 million cubic tonnes of earth scraped from a nearby mountain and shaped by a fleet of backhoes into mounds up to 14 meters (46 feet) high.

Cranes loom over a towering seawall and new roads snake over the hills.

Officials, including Mayor Futoshi Toba, deplore regulations that delayed construction and worry that with the passing of time, attention will be diverted from a recovery only 60 percent complete. National funds for rebuilding will dip with the new fiscal year from April.

Many also worry that construction for the 2020 Summer Olympics in Tokyo will hamper the rebuilding of the town.

“If construction overlaps, there won’t be enough workers and wages will rise, making houses more expensive,” said Toba, who watched helplessly from the city hall roof as the town was destroyed. His wife, with whom he had spoken moments before the quake, was killed.

“Why did the government want the Olympics in 2020? I think they could easily have hosted them four years later.”

SPRING SNOW
Some residents say the new embankments are uncomfortable reminders of how much their lives have changed.

“I think probably a lot of people have complicated feelings,” said city official Tsuyoshi Yamada. “But their feelings of wanting to live in a safe place are stronger.”

Long-suppressed feelings of anguish are emerging as life slips back into routines, but a stigma against mental illness in Japan makes many people reluctant to seek help.

“They keep their feelings shut tight in their chests out of a sense that others have suffered even more,” said psychologist Kiyoka Yukimoto. “For this city to really recover, they need mental health services.”

Volunteer firemen, who took to the streets telling people to flee as the water loomed, have particularly painful memories. One man began weeping as he recalled 51 colleagues who lost their lives.

“A couple of guys went down to check on an elderly man, even though I said we had no more time. None of them came back,” Kumagai said.

Toba, whose duties kept him from searching for his wife or seeing his children after the quake, said feelings were complex.

“It always snows around 3/11, even though it’should be spring. But the weather reminds us of that day and everybody remembers those who died,” he said.

“At the same time, it is five years, so we shouldn’t just talk about gloomy things. We need to look forward and build a place where children can’talk about their dreams.”