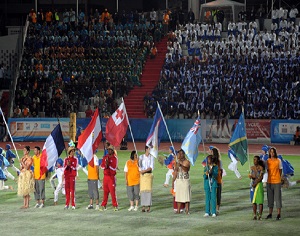 The Governor General, Grand Chief Sir Michael Ogio, says the Pacific Games should be seen as an announcement to the rest of the world that Papua New Guinea’stands ready to foster friendship and goodwill with other countries.

This announcement was made as the Governor General was speaking at the Ceremonial Parade and Memorial Service of the thirty-fourth Remembrance Day celebrations at the Remembrance Park in Port Moresby.

He was making reference to the 2015 Pacific Games, the largest sporting event that united twenty-four island states.

“It is a way to unite and share common ideas for the betterment,” he said.

The Governor General said Papua New Guinea must continue to strengthen its relationship with other Pacific island countries and the rest of the world.

David Eri Makes a Come Back into the Pukpuks