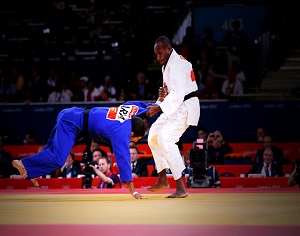 The first time Raymond Ovinou stepped on to the mat in the Olympics was in London 2012.

Three years later, the Papua New Guinean judoka is on another Olympic journey, this time towards Rio de Janeiro in 2016.

It will be the Ovinou’s second Olympics but it will also be his last for Team PNG.

The experience from 2012 is still fresh in his memory, which he is using as motivation as he sets his focus for the Rio Olympics.

His journey is currently taking him to international qualifying events and he is confident of making his second and final Olympics a memorable one.

“This will be my last Olympics so I want to put up a good fight,” he said.

And when he has thrown his last opponent to the floor, Ovinou aims to help develop the younger athletes and promote the code of judo in PNG.

Competing for Team PNG at the Pacific, Commonwealth and Olympic Games were all big achievements for him and he sees the need to impart this knowledge to the next generation of judo athletes.

While Ovinou has set his aims high, he understands the value of hard work and the commitment that is needed to get him there.

He has been attending regular competitions on the international scene, where focus and discipline are required to receive the best results.

President of the PNG Judo Federation, John Jambert, said Ovinou has been hard at training since the start of the year and will be working on his skills and match fitness to get a ticket to Rio.

In London, he showed some promise, but a more experienced and higher ranked opponent managed to contain him.

He also made history that year, being PNG’s first Olympian in the sport of Judo.

This time round, Ovinou will have the experience he needs and will be settled when he steps onto the mat again in Rio.

“I was a bit over confident in 2012 but we all learn from our experiences and I know what to do now and I am working on my skills, techniques and the focus I need to compete at this level,” Ovinou said.

Currently ranked 122 in the world and competing in the 66kg division, Ovinou will be Team PNG’s lone judo representative in Rio.

Ovinou has already attended his first two events for this year, which were the Oceania Judo Union’s Open Championships and a training camp held in Wollongong, Australia on November 13 and 14.

Airports one of ADB’s Top Priority Programme in PNG

Residents voice reasons for not trading inside the Gordon Formal Market