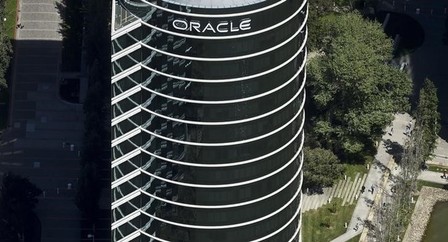 SAN FRANCISCO (Reuters) – A whistleblower lawsuit filed against Oracle Corp over its accounting practices underscores the pressures established computer companies face to show that they are growing in the fast-moving business known as the cloud.

The lawsuit, filed on Wednesday in U.S. District Court in San Francisco by former Oracle senior finance manager Svetlana Blackburn, also revives longstanding questions about proper accounting when software and computer services are bought on a subscription basis rather than as a single package, analysts said.

Those questions are becoming more urgent as companies including Oracle, IBM, Microsoft and SAP race to transform their businesses for an era in which customers no longer own and operate their own information technology systems and instead lease computing services and software from cloud vendors using vast data centers.

Blackburn’s lawsuit accuses Oracle management of pushing her to “fit square data into round holes” to make Oracle’s cloud services’ results look better. She alleges that her bosses instructed her to add millions of dollars of accruals for expected business “with no concrete or foreseeable billing to support the numbers.”

“We are confident that all our cloud accounting is proper and correct,” an Oracle spokeswoman said on Thursday, adding that Blackburn worked at Oracle for less than a year and was terminated for poor performance.

Blackburn does not use the word “fraud” in her lawsuit, and analysts say outright fraud is unlikely.

Nevertheless, the situation poses risks, said Pat Walravens, an analyst at JMP Securities, partly because Oracle’s sales force has been offered big incentives to book cloud deals. An Oracle spokeswoman did not immediately respond to a request for comment about the incentives.

Oracle shares fell almost 4 percent the day after the lawsuit was made public.

Accounting for cloud software “can get very complex and requires judgment calls and estimates which a third party might disagree with upon further review,” Walravens added.

Because cloud software is growing fast while traditional software sales slow, companies have an incentive to play up their prowess in the cloud.

In quarterly reporting, many companies have begun to break out some measure of cloud revenue, including Oracle, SAP, Microsoft and Amazon.

Accountants and analysts say that classifying software sales as cloud or traditional remains something of an art.

“There’s some subjectivity in ‘is it cloud, is it traditional software?,” said Steve Biskie, an auditor and co-founder of compliance consultancy High Water Advisors.

Like others, he said the most nebulous part of cloud accounting concerns situations where the customer buys a product that can be used partly in the cloud, and partly on its own hardware.

U.S accounting rules state that in cases when use is mixed, companies should allocate the revenue between traditional, or licensed software; and cloud, or hosted software.

There lies the gray area, says Enterprise Strategy Group analyst Dan Conde, and the point on which the Oracle lawsuit might hinge.

“They can’t tell how much I use my own hardware,” he said. “Am I a casual user, or writing a lot on a computer? It then requires some guesswork there.”

Software accounting issues have dogged companies for years, particularly subscription-software businesses. Three years ago, the U.S. Securities and Exchange Commission investigated IBM over how it reports its cloud-computing revenue, an investigation that ended in 2014 with no enforcement action.

Five years ago, Bernstein analyst Mark Moerdler took cloud-software company Salesforce.com Inc to task for financial practices such as how it accounts for sales commissions.

An SEC inquiry over a similar issue, which ultimately led to the company restating its 2002 and 2003 results, contributed to a delay in Salesforce.com’s 2004 initial public offering.

In 2006, software maker Computer Associates had to restate past financial results after an internal audit found issues concerning stock options and how the company booked some subscription revenue.

Its former chief executive, Sanjay Kumar, pleaded guilty to securities fraud in 2006 and was sentenced to 12 years in jail.

Chinese auto website Bitauto to get $300 million in funding

Instagram adds features to keep up with young, messaging users