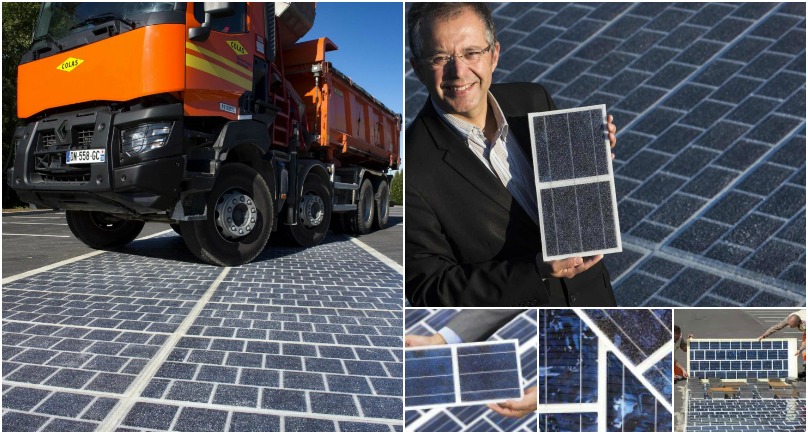 The French government has announced plans to install solar photovoltaic panels on 1,000 kilometres of road over a period of five years. This is a major step forward for green energy.

Known as the “Positive Energy” project it is the intended that the supply of this renewable energy will provide power to 5 million people – or about 8 per cent of the French population.

The French Agency of Environment and Energy management states that four meters of solarized road can power one household, except for its heating whilst a kilometre can supply enough electricity for 5,000 inhabitants.

It took Colas in partnership with the French National Institute for Solar Energy five years of research and development to produce the Wattway, which is the first of its kind in the world.

Wattway panels are comprised of photovoltaic cells which collect solar energy via a thin film of polycrystalline silicon that enables the production of electricity.

The panels are glued directly on top of existing pavement thus there is no need to deconstruct and rebuild existing infrastructure. Wattway panels can be installed on any road in the world and without any additional civil engineering work.

These panels are sturdy, skid resistant and designed to last and bear all types of vehicle traffic including trucks, Colas tested them under the weight of 6-axle trucks and they worked just fine.

Colas CEO, Hervé Le Bouc, said “The panels were tested on a cycle of one million vehicles, or 20 years of normal traffic a road,  and the surface does not move.”

According to France’s Minister of Ecology and Energy, Ségolène Royal, the Positive Energy project will be funded by raising taxes on fossil fuels, a decision Royal says is “natural” given the low prices of oil.

Click here to learn more about Wattway and the Colas Solar Road in this short clip.

Underdogs Scotland have nothing to lose, says Dickinson