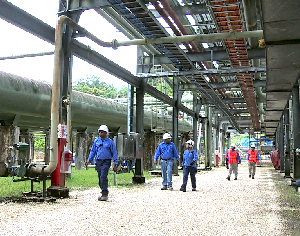 Oil Search Limited (OSL) has announced a record profit for the year 2014.

The company today announced a Net Profit After Tax (NPAT) of US$353.2 million, around K880 million.

The successful commencement of LNG production and export from the PNGLNG Project was highlighted as a major contributing factor to the overall financial performance of Oil Search.

In fact, the company’s strong result was driven by a near tripling of production following the commencement of LNG sales in May 2014.

Shareholders of Oil Search, which include the Government of Papua New Guinea, will be pleased with Oil Search’s 2014 full year results, with the company also announcing a dividend payment of  US 14 cents per share – three and a half times higher than 2013 dividends.

However, key challenges remain in 2015 – not least, the current downturn in world crude oil prices, which at present is trading at around US$50 per barrel.

According to Oil Search managing director, Peter Botten, the current downturn in  global oil prices have forced the company to re-examine its operations, to now focus on the company’s high returning core LNG growth projects.

Top of the agenda for Oil Search is the development of the P’nyang gas field, as well the Elk/Antelope gas field in Gulf Province.

The Late Blaise Nangoi To Rest In Peace