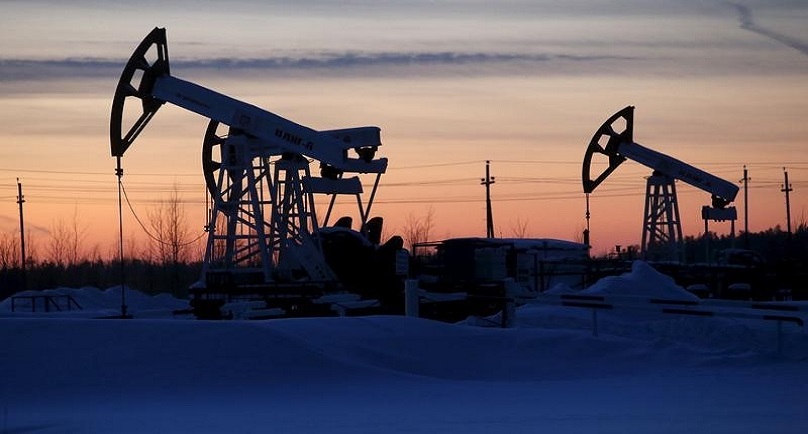 NEW YORK (Reuters) – Oil markets settled up as much as 6 percent on Monday as speculation about falling U.S. shale output and a rally in equities fed the notion that crude prices may be bottoming after a 20-month collapse.

Prices began the week with a rebound in Asian trade, reacting to Friday’s U.S. rig count data. The number of oil drilling rigs in operation fell to a December 2009 low after nine straight weeks of cuts.

Oil got a further boost after the International Energy Agency, the world’s oil consumer body, said U.S. shale oil production could fall by 600,000 barrels per day (bpd) this year and another 200,000 bpd in 2017.

IEA executive director Fatih Birol told CERAWeek, an industry gathering in Houston, that crude oil at $80 a barrel would be good for both producers and consumers, although the agency said in a report a strong price rebound was unlikely under present market conditions.

The rally benefited from bids to narrow the discount of the expiring front-month contract in U.S. crude to the second month, traders said. The March contract settled almost $2 a barrel lower than April which would be the front-month from Tuesday. On Friday the discount was more than $2.

Oil prices have been in a recovery mode since last week after Saudi Arabia and fellow OPEC members Qatar and Venezuela agreed with non-OPEC member Russia to freeze output at January’s highs.

But Iraq, a key member of the Organization of the Petroleum Exporting Countries, said on Monday it planned to raise production to above 7 million bpd over the next five years, and export 6 million bpd of that. Iran, OPEC’s fourth largest producer, has repeatedly pledged to raise its output too to pre-sanctions levels.

OPEC Secretary-General Abdullah a-Badri told CERAWeek that OPEC and non-OPEC producers might take “other steps” to reduce the global supply glut, and that he was willing to speak with U.S. officials.

“The sharp deceleration in demand growth in recent months (especially gasoline) is a key feature of our more bearish view and expectations for a longer rebalancing period,” analysts at Morgan Stanley said.

All Blacks captain McCaw retires from all rugby

From fear of water to gold medal, Bosnian swimmer beats the odds