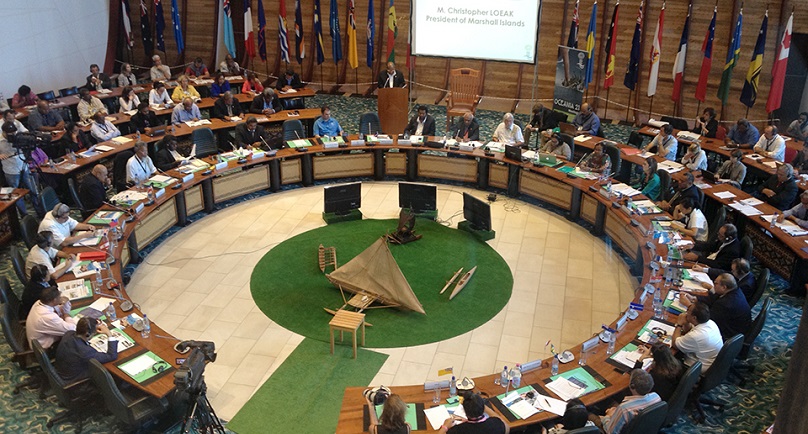 The 3rd Oceania 21 Summit is currently being held in New Caledonia from the 28 – 30 April.

The meeting is chaired by the Deputy Prime Minister of Samoa, Fonotoe Nuafesili Pierre Lauofo, and is led by David Sheppard, as the Director General. Also present are five members of the Secretariat of the Pacific Regional Environment Programme (SPREP).

Ending today, the summits’ focus is on sustainable development; with a main aim of having a collected view on the issues of greenhouse gas emission and climate change; which will be presented to the UN Climate Convention (COP21) in Paris, sometime towards the end of this year.

At the opening of the forum, the vice-president of New Caledonian government, Jean-Louis D’Anglebermes, stated that the voice of the Pacific Islands needs to be heard, adding that:

“This third summit has the mission of adopting and approving the text of a brief and straightforward declaration, called The Lifou Declaration, insisting upon the most ambitious call to reduce greenhouse gas emissions at the climate negotiations.”

The three day forum was split up with the first day being committed to: The chairman of the forum, Samoan Deputy PM, Lauofo, said that one of his responsibilities as chairman of the Oceania 21 Meeting is to facilitate and present The Lifou Declaration to the members, adding that it was not a task that should be taken lightly.

“…, because although we contribute little to the causes of climate change we are at the forefront of its impacts, our declaration should send a clear signal to the Paris Conference to negotiate in earnest and in good faith so that Paris becomes the conference of action and hope for our islands in 2015,”said Lauofo.

The third and final day of the summit will end today with a leaders retreat on Lifou to finalise The Lifou Declaration.