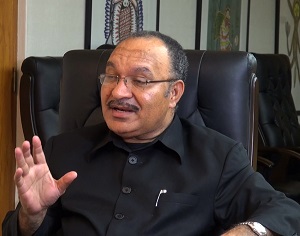 “There will be challenges, particularly as the larger economies around the world face difficulties, but we are working to insulate people and businesses in our country from these complications.

“In particular, while the price of oil has dropped in recent months, for the most part this will not overly affect LNG revenues as we have forward contracts in place that are set at fixed pricing formula.

“Our domestic economy remains strong with a range of major projects underway that have already been funded and are creating tens of thousands of jobs throughout the country.

“This includes the infrastructure programs that are needed to ensure our economy continues to generate business and create jobs into the future.”

However, the Prime Minister is confident Papua New Guinea will make positive progress with the current 8 per cent growth in the economy. O’Neill maintains that the current Papua New Guinea Government’s key policies of free education, universal healthcare, improving law and order and infrastructure developments will be the cornerstone of the country to back the economy.

He said government priority areas in service delivery will place Papua New Guinea in a better position to take these challenges head-on.