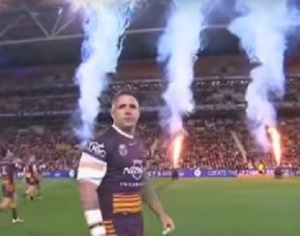 The Canterbury Bankstown Bulldogs will go up against the 8th place St George Illawarra Dragons at ANZ Stadium in Sydney.

That will be followed after by an all-out Queensland battle between the Brisbane Broncos and North Queensland Cowboys in Suncorp Stadium Brisbane.

The Queensland derby never fails to excite fans from across the state and the mouth-watering qualifying final between the second-placed Broncos and third-placed Cowboys will be no exception.

From Tweed Heads to the Torres Strait and everywhere in between, all eyes will be fixed on what is sure to be another glorious chapter in a rivalry that’s been simmering away for 21 seasons.

There have been some tight tussles and occasional floggings handed down over the years, but tonight’s Suncorp Stadium blockbuster is arguably the most importance clash between these sides since the Cowboys entered the competition in 1995.

The equation is simple: the winner gets a week off and only needs to win one more home game to make the grand final, while the loser will walk a finals tightrope in order to make it to the decider in the first weekend of October.

Broncos will welcome back halfback Ben Hunt and Alex Glenn back from suspension, while Jordan Kahu replaces Lachlan Maranta on the wing.

Michael Morgan returns from an ankle injury for the Cowboys and slots straight in at five-eighth with Ray Thompson dropping to six-man bench.

Canterbury have surged into the finals in fifth place, on the back of five straight wins, one-time ladder leaders St George Illawarra have limped in at eighth, with four wins from their final five, reversing what had been a seven-match losing streak .

The Dogs were far from convincing over the past fortnight but five wins and the return of Josh Reynolds last week in time to replace Trent Hodkinson.Draw Widget – Finals Week 1 – Bulldogs vs Dragons

Dragons five-eighth Gareth Widdop, still not fit and Drew Hutchison once again named in the halves. Coach Paul McGregor has named an unchanged 17, though new names Justin Hunt, Nathan Green and Mark Ioane have been added to a lengthy bench.

Bulldogs coach, Des Hasler has just one new face in his 17men squad, fullback Brett Morris who was rested last week. That pushes Sam Perrett back to wing and Chase Stanley out of the side. Aiden Tolman returns to the starting side with Sam Kasiano reverting to the bench, while Lloyd Perrett has been added as 18th man.