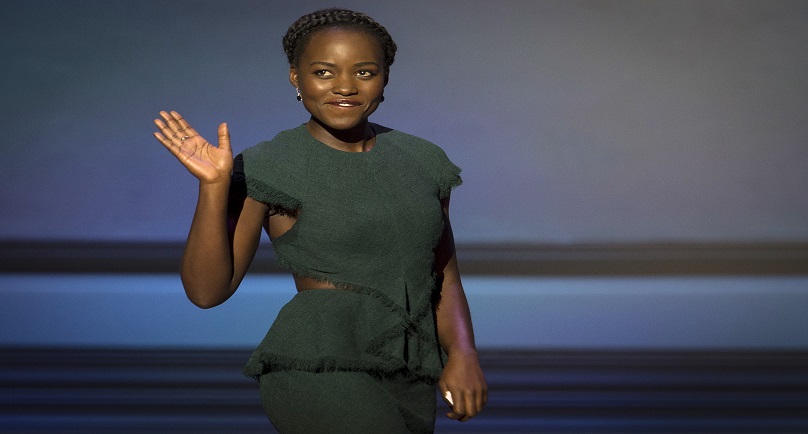 Image: Actress Lupita Nyong’o walks on stage at the Glamour Women of the Year Awards in the Manhattan borough of New York November 9, 2015.

By Lisa Richwine
LOS ANGELES (Reuters) – When actress Lupita Nyong’o showed up on the set of “Star Wars: The Force Awakens,” many of her co-stars did not know what role she was playing.

Newcomer Daisy Ridley was sworn to secrecy for three months that she had even been cast in the film. And with a week to go before the world premiere on Dec. 14, some of the actors have not yet seen “The Force Awakens.”

“I was in scenes in which some of the characters I was working with did not know who I was,” Nyong’o, who it is now known plays pirate Maz Kanata, told Reuters. “That’s how secretive it was.”

Aside from broad character outlines, details are being kept tightly under wraps, prompting endless online speculation by fans eager to see the saga’s first film installment in a decade.

Walt Disney Co, which took over “Star Wars” with its 2012 purchase of Lucasfilm, scrapped the typical Hollywood practice of screening the movie for reporters before they speak with the cast. The stars revealed little in interviews, declining to answer even basic questions.

Does Rey, the central character played by Ridley, ever pick up a lightsaber? “We’ll have to wait and see,” Ridley said. Adam Driver claimed he could not remember if his character, the Darth Vader-like Kylo Ren, had his own theme song. (Director J.J. Abrams later confirmed he did.)

Stars Oscar Isaac and Gwendoline Christie said they have not seen the film yet.

Nyong’o clammed up when asked why her character appeared smaller than diminutive droid R2-D2 in film posters.

“I can’t say anything about my size,” she said with a laugh, but perhaps added a clue: “You know, posters are not really up to scale.”

The cast and Abrams said they wanted to preserve the element of surprise for filmgoers.

“I would like them to sit down, relax in their seat and just let the story begin,” said Harrison Ford, who returns as Han Solo. “I’m not going to ruin it for them by talking about what happens.”

Producer Kathleen Kennedy did divulge something fans will not see. “Jar Jar is definitely not in the movie,”

Kennedy told reporters, referring to the unpopular character from “The Phantom Menace.” [ID:nL1N13W01E]

What is known is that “Force Awakens” is set 30 years after “Return of the Jedi.” A stormtrooper named Finn (John Boyega) encounters Rey and droid BB-8, and the three embark on a journey. Glimpses of them on Rey’s home planet, Jakku, have been seen in trailers released by Disney.

Rey’s last name is unknown, leading fans to guess she may be Luke Skywalker’s daughter. Or Han and Princess Leia’s. All three classic characters return, but Luke’s role is unclear. He is absent from “Force Awakens” posters and trailers, prompting theories that the character dies or joins the dark side.

Why such mystery surrounding Luke? “Just ’cause,” Ford said coyly.

According to Boyega, audiences will be glad they did not know more in advance. “I don’t want to spoil it for anyone,” he said. “You’ll thank me later.”