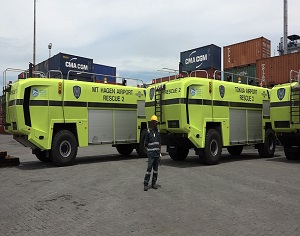 The Government has invested K27 million into nine state of the art fire trucks, in its latest move to get Papua New Guinea’s airports to the same par as the world.

The trucks are fully funded by the Asian Development Bank, in partnership with the National Airports Corporation.

In the last three years, airport infrastructure developments have been occuring.

Goroka will also have a new K82 million airport- all paid from an Asian development bank loan. Its investment, the government is keen on making.

“The trucks are specifically made for Papua New Guinea, our staff went over to get training,” said National Airports Corporation Managing Director, Joseph Tupiri.

While critics may say that the government is spending too much money on airports and the loan will put a burden on the economy.

Papua New Guinea’s economic growth and image in the Pacific will be improved. The challenge for the National Airports Corporation is to effectively sustain the airports by creating independent internal revenue streams.