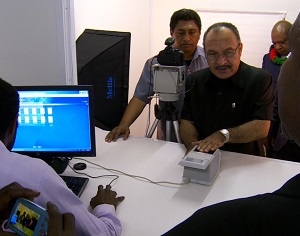 A memorandum of understanding was signed between the Christian Churches of PNG and the NID team to carry out awareness on the project.

Project officers say joint awareness from both the NID project team and churches in the Southern Highlands paves a positive outcome of the implementation stage.

Though the ID system is optional, everyone is encouraged to register because of the benefits that come with it.

Once registered and given a national ID card, card holders can use their cards to open bank accounts or other options when travelling. The card is also predicted to be useful once the government introduces pensions for the old.

Last month, a service level agreement was signed between the National Statistical Office and Post PNG for the transportation of NID project equipment out of Port Moresby. Provincial police officers will also be assisting the team for security operations in each province.

Meanwhile, Manus and Milne Bay are the next two provinces that will undergo NID registration.

Public Accounts not satisflied with Telikom