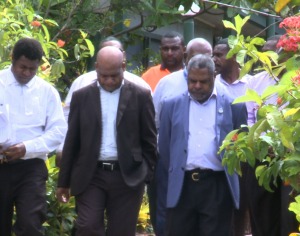 A new trial date has been set by the Waigani National Court, for the court hearing between Western Governor, Ati Wobiro, former provincial administrator, Doctor Modowa Gumoi, and local businessman, Norman May, against the state.

This case involves claims of misappropriations against the three men regarding projects in Western Province.

The trial date is now set for April 4, before the Daru National Court.

The new trial date was set on the grounds that both parties needed additional time to collect more witness statemen’s from the five project areas involved in the case.

The initial four days trial hearing was set to commence in Daru today. However, lawyers from both parties made submissions at the National Court last week, to vacate the trial dates, on the grounds that not many witnesses have come forward.

This morning, Justice Sir Gibbs told the defendants and their lawyers that gathering witnesses was not the responsibility of the courts but a task for the lawyers.

This case involves misappropriation claims against Wobiro, Dr Gumoi and May regarding the operations of five projects in South and Middle Fly Districts of Western.

Last year, the three men were arrested and charged for conspiracy to defraud, misappropriation and abuse of office.

Judge Sir Salika told both lawyers that the submissions on the trial dates were unnecessary and the court would want the matter to be heard as soon as possible.

He directed both parties to use the remaining four weeks to collect statemen’s from their witness before the matter returns to court on April 4.

All respective bails were extended.