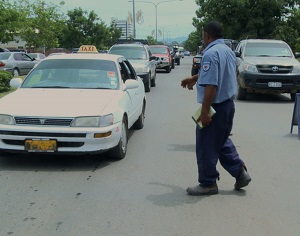 All land transport bodies will come under one management once the Road Authority Act becomes a law.

This follows the state’s move to remove all unworthy vehicles and promote road safety on all roads in the country.

In a conference today, Acting CEO for Road Traffic Authority Nelson Terema said the new Act is focused on providing efficient and quality service to the people.

Terema said because of a number of organisations performing similar tasks like issuing driver’s licences and registering vehicles, there is no proper record of the number of unworthy vehicles on our roads.

He said the Road Traffic Authority Act will impose a centralised system that will run right throughout the country and his office aims to complete this by March 2015.

In 2004, the Road Traffic Authority Act was passed by the national government and it became an Act of Parliament. The law, once in place, will corporatize a public system in the country.

Currently, there are talks between PMV associations and the Road Traffic Authority on how both parties are planning to work under only one umbrella once the law is passed.

Terema said the non-existence of proper traffic laws in the country has contributed to the increase in number of vehicles parked illegally outside officers or business houses.

But with the new law soon to be established, road and traffic accidents in PNG are sure to be minimised.