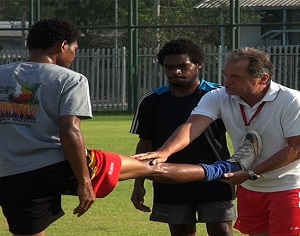 Flemming Serritslev has been named as the new coach of the PNG men’s soccer side, replacing former mentor Ricky Herbert.

Serritslev, from Denmark, has coached Armenia, Iran and Nigerian youth teams and has been on the job for over 40 years. He was with the Port Moresby based senior men’s train on squad this morning at Bisini.

With little knowledge on the team and only reading online about PNG men’s soccer, Serritslev was in Lae last weekend with the Lae based train on squad.

This week he is in Port Moresby running training sessions at the Bisini Complex. The group have been training for three mornings with a lot of skill being discovered, mainly in the midfield and attacking positions.

Serritslev said Papua New Guinea lacks in defence at present, and that is something he will be working on with the team.

With the National Soccer League set to kick off this weekend, Serritslev said he will be able to watch a few matches, with the possibility of getting to know some of the players.

We are also on the eve of the Oceania Nations Cup and the World Cup qualifiers. Originally, preparations leading up to these tournaments were in doubt, but Serritslev has confirmed that there is enough time.

He wants more training sessions held next week, with the hope of more team related exercises to be done.