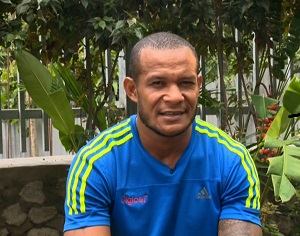 His success dates back to 2007, when he made his first appearance for Team PNG at the Pacific Games in Apia, Samoa.

Since then, he has been to the Commonwealth Games and Pacific Games, thereafter breaking Takale Tuna and Subul Babo’s track records from the 1991 Games.

Throughout his sporting career, Nelson became fond of the people who surrounded him. He says there is much more to sports than just representing your country.

Fortunate as he is and with the opportunities he’s been given, he strongly believes that the good of sports can change and determine the future for the youth.

“It’s not always about skill, you have to have the will and courage,” Stone says.

Meanwhile, in the lead up to the Pacific Games, much of Nelson’s preparations are enclosed. He says he is working closely with coach Lloyd Way and 2015 will be the year he and Lloyd will shine.