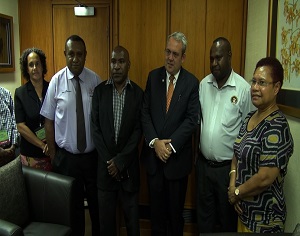 Sport and Tourism Minister, Justin Tkatchenko, said a report is with NEC which alleges a large sum of money was abused.

Tkatchenko made this statement following the decision to amalgamate the National Cultural Commission (NCC) with the National Museum.

He made it clear that those implicated will be held responsible.

“We will take into account everything and make sure this investigation is completed,” Minister Tkatchenko said.

In the meantime, the NEC has revoked the appointment of Dr. Jacob Simet as Director of the Cultural Commission.

This sees Tourism Promotion Authority officer Colin Taimbari being appointed as the Acting Executive Director for NCC, for a period of 12 months.

Taimbari will be in charge of NCC during the transition process.

“I have full confidence in Mr Taimbari to carry out this responsibility,” he said.

Minister Tkatchenko says a duration of six months has been given before things are finalised and put forward for the July parliament session.