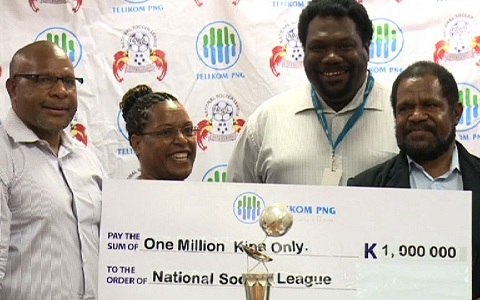 Telikom has continued its support of professional football development, by announcing a major sponsorship package to the National Soccer League (NSL).

With Besta Football Club on a bye, and the Morobean derby destined to light up Lae city, the next four months are set to be a football fest with Telikom making a K1 million sponsorship to the NSL.

Rondoke said Telikom was proud of its continued association with the NSL as well as the company’s contribution to raise soccer in the country to a higher level.

Chairman Lupari, praised Telikom and stated that the continuity of sponsorship reflects the quality of services that Telikom has to offer. He said the company one that realizes the significance of their community obligations and with their help, the task is to build the NSL into a competition that could be recognized internationally as well.

Lupari also publicly apologized to franchises and fans over the delays in the season, but maintained that that was all behind them, as the Board looks forward to the future.

The sponsorship will be spread out over three years with K300, 000 a year going toward operational costs, plus a further K100, 000 in marketing.