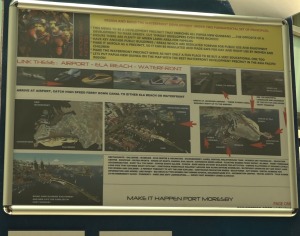 In an effort to encourage public discussion and input into the development of cities and towns, the National Research Institute (NRI) ran an “Ideas Competition” on how the Fairfax Harbour in Port Moresby should look.

Design ideas came from around the world and the five finalists are now up for the public to vote on.

The five finalists were unveiled earlier this week and voting started yesterday at Gordons.

Dr. Charles Yala of the NRI said the objective is to encourage Papua New Guineans to think about what “livable” cities and towns look like.

For Port Moresby, attempts to ease traffic congestion are to build ring roads. Dr. Yala says this will not help much because the problem lies in the locations of services, shops, offices and residential areas.

“You will still have people flocking into Boroko where the schools and hospital are located,” Dr. Yala said

What we need are satellite towns to ease this burden.

Dr. Simon Aleker, as senior reaserch fellow at NRI has been on the ground with his team explaining the designs and collecting votes. He says the response has been “overwhelming” and the most frequently asked questions were, “who will fund it?”

One of the voters Iso Pando said he was really happy with this opportunity.

Voting is as easy choosing red, blue, green, yellow and purple, the colour code for each of the designs. For Enosh Akrakri, a primary school student, he said his choice was influenced by type of transportation incorporated in the design.

Voting on these designs will continue tomorrow at the City Hall and on Saturday at the Nature Park.

The winning design will be hung at the City Hall and the winner will win K10,000.

PNG Flying the Black Red and Gold in foreign land