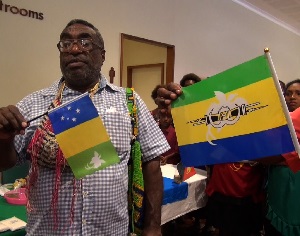 Governor Naru expressed frustration during the independence expo when he saw booths decorated with the wrong flag.

Naru has directed the Lae City Council to go through all shops in the town to identify and destroy the misleading flags.

An independence expo held by Kalang Event Management at Lae’s International Hotel involved business houses and other small to medium enterprises within Lae.

The Governor was furious when he came upon a stall displaying products with a fake flag of the Morobe Province.

He has called on the city council to inspect shops selling it, and for all items to be destroyed. It’s not yet confirmed if there would be penalties imposed for selling the flag.

Service delivery was one of the main topics of discussion during the event.

Governor Naru also attended, using the opportunity to challenge public servants to do their job with a high level of commitment.