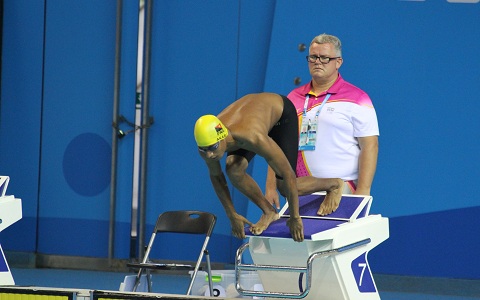 Akara who is from a mix parentage of Milne Bay and Central but is based in Lae was backing up from swims at the Glasgow Commonwealth Games.

Akara was only able to enter the freestyle events, produced two great swims to better his personal bests by 0.73 seconds in the 100m where he swam 58.45 seconds; in the 50m Akara swam a 25.61 to improve on his personal best by 0.03 seconds.

Akara is one of several young swimmers who have come through the PNG’swimming ranks and is targeted to be a part of Team PNG for the 2015 Pacific Games.

Ryan Pini, the Team PNG’swim Coach for the Youth Olympics, was very pleased with Akara’s efforts and the outcome of his races.

Pini only emphasized that Akara keep his strokes up towards the end of the races.