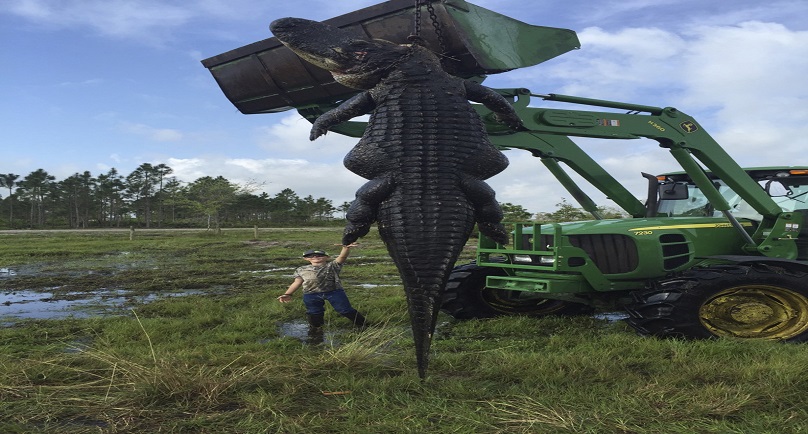 ORLANDO, Fla. (Reuters) – A 780-pound “monster” alligator slain in a Florida hunt and hauled out of the water with a farm tractor falls short of the state record for length, a wildlife official said on Wednesday.

“A big alligator nonetheless, but they are not going to have an official measurement because it’s not going to beat the record,” Tony Young, spokesman for the Florida Fish and Wildlife Conservation Commission, said in a phone interview.

The longest alligator caught in the wild in Florida was measured at 14 feet 3-1/2 inches, he said. The state record for the heaviest gator taken from the wild is 1,043 pounds, according to the commission’s records.

The animal killed on Saturday in a hunt at Outwest Farms in Okeechobee near the Florida Everglades was estimated by farm officials to be about 15 feet long, local media reported.

Outwest Farms charges $550 to $10,000 for hunting alligators up to 13 feet and longer, according to its website.

The gator was discovered in a pond where cattle came to drink, hunting guide Blake Godwin told local news station Fox 13. The hunters used a farm machine to pull it from the water after shooting it, he added.

Outwest Farms posted a photo of what was described as a “monster” capture on Facebook, where a photo of the large animal dangling in the air from the farm equipment prompted mixed feelings. The post later appeared to have been taken down.

“This is making me physically ill,” one person said in a post.

Another poster defended the kill: “For anyone that is talking about relocating this beast … Why not y’all mess with a 15-foot, 800-pound gator? That gator could easily take your life like he was that cattle.”