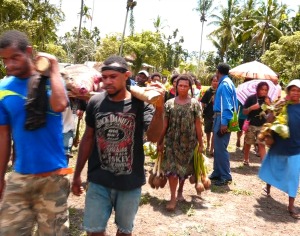 The people of Mumuni in Sohe district, Northern province, have reconciled with their Member of Parliament, Delilah Gore.

The reconciliation that occurred on Thursday at Mumuni Village, in the Higaturu Local Level Government area has opened the window for development, and villagers have pledged their support towards partnership to improve their community livelihood.

It was all about forgiveness and peace; and locals from Ward 15, following a conflict four years ago, expressed it through traditional rituals and prayers.

Sohe MP, Delilah Gore, said the reconciliation was a positive indicator of unity for the children, of now and tomorrow.

“I thank God, for the gift of peace. By reconciling, it is a good sign of unity and the communit,” she said.

Locals Joyce Sambura and Stafford Taimbari said “It was a joyous moment for locals saying the reconciliation opened the pathway for the future.”

PNG Council of Churches calls on Political Leaders to be Honest