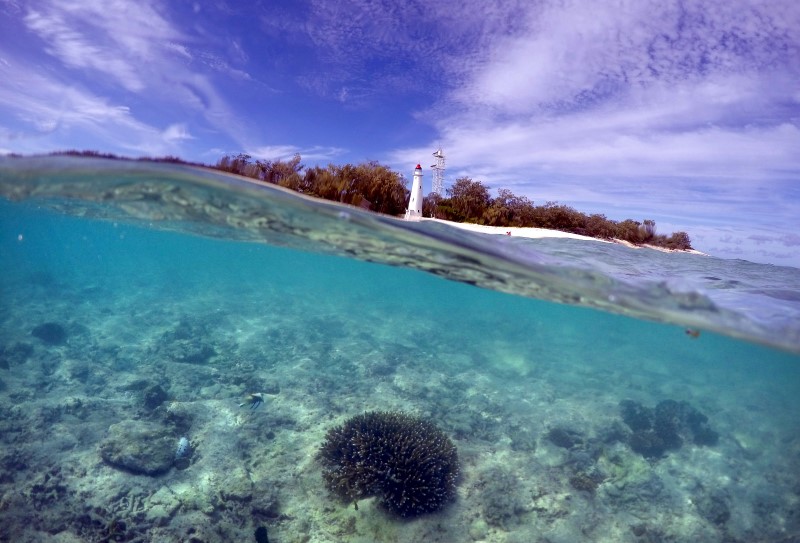 SYDNEY (Reuters) – Mass bleaching has destroyed as much as 35 percent of the coral on the northern and central Great Barrier Reef, Australian scientists said on Monday, a major blow to the World Heritage Site that attracts about A$5 billion ($3.59 billion) in tourism each year.

Australian scientists said in March just seven percent of the entire Great Barrier Reef had avoided any damage as a result of bleaching, and they held grave fears particularly for coral on the northern reef.

After further aerial surveys and dives to access the damage across 84 reefs in the region, Australian scientists said the impact of the bleaching is more severe than they had expected.

“This year is the third time in 18 years that the Great Barrier Reef has experienced mass bleaching due to global warming, and the current event is much more extreme than we’ve measured before,” said professor Terry Hughes, director of the ARC Centre of Excellence for Coral Reef Studies at James Cook University.

Bleaching occurs when the water is too warm, forcing coral to expel living algae and causing it to calcify and turn white. Mildly bleached coral can recover if the temperature drops, otherwise it may die.

Although the impact has been exacerbated by one of the strongest El Nino weather systems in nearly 20 years, which recently subsided, scientists believe climate change is the underlying cause.

The survey findings come just days after Australia’s Department of Environment confirmed it omitted its contribution to a U.N. report examining the impact of climate change on world heritage sites over concerns it could create “confusion” and have a negative impact on tourism.

The World Heritage and Tourism in a Changing Climate report, which was released on Friday with no references to Australia, has sparked outrage from climate scientists, who were not informed that their contributions had been removed.

UNESCO’s World Heritage Committee last May stopped short of placing the Great Barrier Reef on an “in danger” list, but the ruling raised concern about its future.

Australia is one of the largest carbon emitters per capita because of its reliance on coal-fired power plants for electricity.