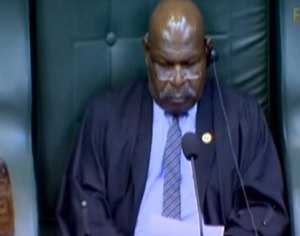 The Motion on the Vote of No Confidence filed by the opposition has been rejected in Parliament.

He has returned the motion to the opposition to rectify the defects.

Mr. Ganasi told Parliament on Thursday 29 October that he received a notice of the motion of no confidence filed by the opposition at 1:00pm Wednesday, 28 October.

Dr. Allan Marat, anticipating what was to come, tried to intervene to guide the Acting Speaker not to proceed further with the announcement.

But his attempts were not entertained.

The Speaker than announced that the motion, though of National Importance, had been rejected.

Northern Governor Gary Juffa and Goilala MP William Samb were the only ones that remained.

A vote of confidence for the Prime Minister was later held following a motion moved by leader of Government Business James Marape.

The Vote was in favor of the Prime Minister 78 votes to 2 votes.

Opposition Leader, Don Polye, says, they have accepted the return of the motion.

But, will resubmit once their legal team asses the reasons of its rejection.