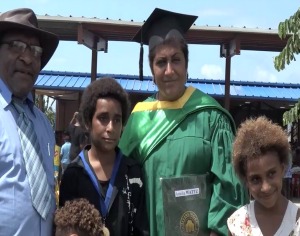 From the 900 plus people who graduated on Sunday, March 13, at the Divine Word University’s 34th Graduation, at the main campus in Madang, is Amelia Wattz, the gold medallist.

It was the biggest ever for the University, graduating more than a thousand graduates nationwide, and Amelia Wattz stood out with the highest Grade Point Average score of 4.

“Achieving a GPA of 4 has come with sacrifices, the biggest competitor was me. I always try to outperform myself, if I did something the next one had to be better. It wasn’t all about study either, it was about mixing pleasure and study and I’ve managed to do that effectively and the results have spoken for themselves,” Wattz said.

The mother of three children has successfully juggled motherhood with her studies and has rightfully bagged a Gold Medal on graduation day.

“I was a full time mum while also helping my husband run his business to support my fees, so it wasn’t easy but with a lot of commitment and support, I’ve managed to come this far and I’m pretty relieved,” said a proud Amelia.

Wattz raked in other awards as well and said all wouldn’t be possible without her family’s support, especially from her very supportive husband Tony.

“My challenge to all the PNG menfolk is that don’t see girls and women as second class citizens no, because they have a lot to contribute to this society. They are valuable and have a lot of energy and they can give back to the society if you give them that room. They can achieve something for us as families and for the country as a whole, especially for a modern society,” said Tony Charles Wattz, Amelia’s husband.

Amelia flew into Madang for the graduation from Melbourne, where she’s currently studying at the Swinburne University.

Amelia will be graduating in Melbourne next year with a double Masters degree and again, she’ll be an Australian Award recipient.

Arore stood down as Minister