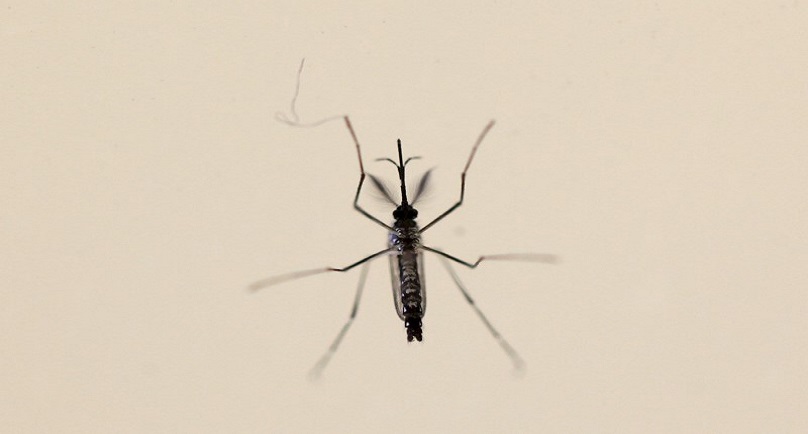 Image: An Aedes aegypti mosquito is seen at the Laboratory of Entomology and Ecology of the Dengue Branch of the U.S. Centers for Disease Control and Prevention in San Juan, Puerto Rico, in this March 6, 2016 file photo. REUTERS/Alvin Baez/Files

LONDON (Reuters) – As the world focuses on Zika’s rapid advance in the Americas, experts warn the virus that originated in Africa is just one of a growing number of continent-jumping diseases carried by mosquitoes threatening swathes of humanity.

The battle against the insects on the streets of Brazil is the latest in an ancient war between humankind and the Culicidae, or mosquito, family which the pests frequently win.

Today, mosquito invaders are turning up with increasing regularity from Washington DC to Strasbourg, challenging the notion that the diseases they carry will remain confined to the tropics, scientists documenting the cases told Reuters.

Ironically, humans have rolled out the red carpet for the invaders by transporting them around the world and providing a trash-strewn urban landscape that suits them to perfection.

The Aedes aegypti species blamed for transmitting Zika breeds in car tires, tin cans, dog bowls and cemetery flower vases. And its females are great at spreading disease as they take multiple bit’s to satisfy their hunger for the protein in human blood they need to develop their eggs.

Around the world, disease-carrying mosquitoes are advancing at speed, taking viruses such as dengue and Zika, plus a host of lesser-known ills such as chikungunya and St. Louis encephalit’s, into new territories from Europe to the Pacific.

“The concern is that we have these species spreading everywhere. Today the focus is on Zika but they can carry many different viruses and pathogens,” said Anna-Bella Failloux, head of the department that tracks mosquito viruses at France’s Institut Pasteur.

In 2014, there was a large outbreak of chikungunya, which causes fever and joint pains, in the Caribbean, where it had not been seen before, while the same virus sickened Italians in 2007 in a wake-up call for public health officials.

Europe has seen the re-emergence of malaria in Greece for the first time in decades and the appearance of West Nile fever in eastern parts of the continent.

Out in the Atlantic, the Madeira archipelago reported more than 2,000 cases of dengue in 2012, in a sign of the northerly advance of what – at least until Zika – has been the world’s fastest-spreading tropical disease.

In the past 40 years, six new invasive mosquito species have become established in Europe, with five arriving since 1990, driven in large part by the international trade in used vehicle tires.

Mosquitoes lay their eggs in the tires and they hatch when rain moistens them at their destination.

North American health experts are also racing to keep up, with the first appearance of Aedes japonicus, an invasive mosquito, in western Canada last November and Aedes aegypti found in

Washington DC, apparently after spending the winter in sewers or Metro subway stations.

The speed of change in mosquito-borne diseases since the late 1990s has been unprecedented, according to Jolyon Medlock, a medical entomologist at Public Health England, a government agency.

For many experts, the biggest potential threat is Aedes albopictus, otherwise known as the Asian tiger mosquito, which is expanding its range widely and is capable of spreading more than 25 viruses, including Zika.

“There is strong evidence that Aedes albopictus is now out-competing aegypti in some areas and becoming more dominant,” said Ralph Harbach, an entomologist at London’s Natural History Museum, who has been studying mosquitoes since 1976.

In the United States, Aedes albopictus has been found as far north as Massachusetts and as far west as California. In Europe it has reached Paris and Strasbourg.

Adding to the challenge for public health authorities are the blurred lines between diseases carried by different mosquitoes, as shown by research in Brazil this month that another common mosquito, Culex quinquefasciatus, may also be able to carry Zika.

Both Aedes aegypti and Culex quinquefasciatus probably first arrived in the Americas from Africa on slave ships, scientists believe. In the centuries since, commerce has shuttled other species around the world, while air travel has exposed millions of people to new diseases.

“You’ve got a global movement of mosquitoes and a huge increase in human travel. Humans are moving the pathogens around and the mosquitoes are waiting there to transmit them,” said Medlock.

Human incursions into tropical forests have aggravated the problem. Deforestation in Malaysia, for example, is blamed for a steep rise in human cases of a type of malaria usually found in monkeys.

There have been some victories against mosquitoes, thanks to insecticide-treated bed nets and vaccines against viruses like yellow fever and Japanese encephalit’s, as well as a new one for dengue approved in December.

But mosquitoes still kill around 725,000 people a year, mostly due to malaria, or 50 percent more than are killed by other humans, according to the Bill & Melinda Gates Foundation.

Climate change adds a further twist. A 2 to 3 degree Celsius rise in temperature can increase the number of people at risk of malaria by 3 to 5 percent, or more than 100 million, according to the World Health Organization.

Hotter weather also speeds up the mosquito breeding cycle from around two weeks at 25 degrees to 7 to 8 days at 28 degrees, according to the Institut Pasteur’s Failloux.

So is it time to wipe out mosquitoes altogether?

Aggressive action in the 1950s and 1960s, including the use of the pesticide DDT, certainly pushed them back for a while.

Today, genetic modification, radiation and targeted bacteria are being considered.

Trying to eliminate all mosquitoes, however, would make no sense, since there are 3,549 species and fewer than 200 bite humans.

“It might be possible to wipe out a few species but we don’t want to wipe out the good guys because a lot of them serve as food for frogs, fish and bats,” said Harbach. “Many also visit flowers to feed on nectar and may play a role in pollination.”

Some are even our friends. Harbach has a soft spot for the Toxorhynchit’s genus, which have a convenient penchant for eating Aedes aegypti larvae.