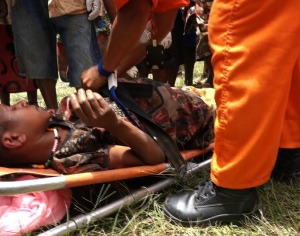 A young mum, Lisia Elisa, was air lifted from Yangaku village in the remote Menyamya district to Lae’s Angau Hospital this morning after labour complications.

She and her baby have survived, after the Morobe Provincial Government funded medical evacuation was undertaken by a Manalos Aviation chopper, with a support nurse on-board.

At around 10am this morning, a call was received by the medivac team, from a remote village in Aseki, outlining that a young mother had complications during labour.

From word on the ground, the mother’s condition was critical and the medivac chopper would need to fly to Aseki with a nurse immediately.

The chopper refueled, and the nurse prepared for the dash to Aseki, about 150 kilometres from Lae by road.

The pilot captain, Jurgen Ruh, explained that the people on the ground notified him that they will signal the chopper by smoke and a yellow cloth.

“I couldn’t locate the village on the map, so the people on the ground said they make a smoke fire and wave a yellow cloth,” said Ruh, who is also Manalos Aviation Chief Executive Officer.

It was a race against time to get to the location and find the village.

Aseki is in the Menyamya district and people are scattered across tough terrain.

The flight takes nearly an hour, and the pilot pushes several kilometres past the Aseki station until the smoke signal and yellow cloth are sighted.

As they land, villagers bring the young mother, in severe pain. She has had a breach during labour, and was very weak.

She and her baby are part of alarming statistics reported by the United Nations that 5.5 per cent of babies die before the age of two in Papua New Guinea, and nearly half of mothers giving birth in rural areas do it without a midwife or doctor.

She was taken on a stretcher to the chopper and placed inside, with a relative also accompanying her.

They take off from Yangaku Village while her blood pressure is taken and her vitals are recorded down.

The nurse, Naomi, scrambles on the chopper with the turbulence to slip a needle into the mother’s veins to give a drip.

The young mum urgently needs to get to Angau and the nurse on the chopper has the difficult task of getting her stable while in the sky.

A little over 30 minutes later and the chopper landed in Lae, and the young mum put into an ambulance and taken to Angau Hospital.

Getting the mother to Angau gave her a greater chance of survival; she very likely would have died if she was taken to Aseki Station, about 12 kilometres walk away from the village.

Manalos Aviation does around 147 medivacs every year out of Morobe’s rural areas. This simply means that in a year over 140 mothers are directly saved.