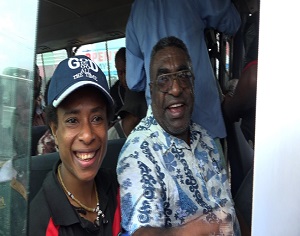 Morobe Governor, Kelly Naru, caught a bus to work this morning after his official vehicle was grounded for mechanical repairs yesterday.

While it was a normal working Friday for the Governor, his presence at Eriku bus stop attracted so much attention that he arrived late for official duties at his office.

The governor’s first engagement this morning was to address compensation claims by Ahi landowners.

His official car was in the workshop for urgent repairs, so the Morobe Governor walked to Eriku this morning and caught a bus to Lae’s top town.

At the bus stop people flocked to catch the same bus as the Governor.

This morning, those who travelled with him all had their bus fares paid for by him.

“Its always good to catch the bus, its right where the action is, feel ordinary and feel normal, same speed we are going to work now,” said Naru.

After arriving in town, he made his way past the Westpac bank, making several stops to meet people before gradually making his way to the tutumung to meet with the clan leaders from Butibum and Kamkumung.

This is not the first time, Kasiga, as he is known here in Morobe has travelled to work on a bus.

But even with the frequency at which he uses public transport. He still draws a lot of public attention.

Most of the time, the Governor wears lose fitting shirts and slippers or sandals depending on the occasion. This morning, the slippers came out with the Morobe bilum.