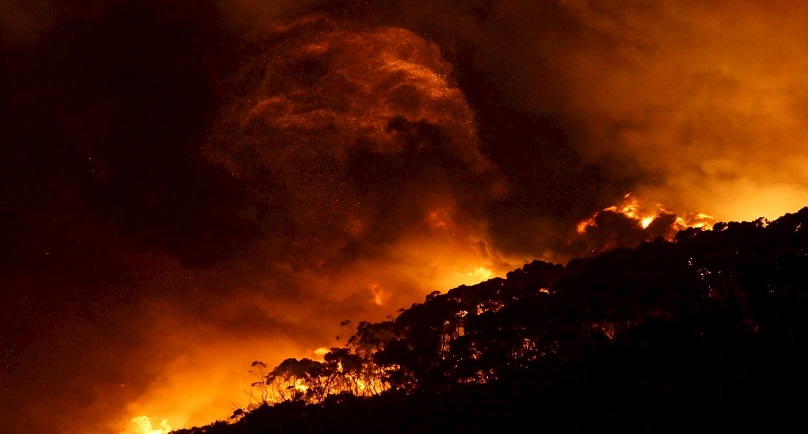 MELBOURNE (Reuters) – More than 100 homes burned down in a leading Australian tourist area in bushfires on Christmas Day and the situation remained dangerous on Saturday, as officials predicted more blazes to come later in the hot southern summer.

While around 500 firefighters and 13 firefighting aircraft battled the flames along parts of Victoria state’s picturesque Great Ocean Road, teams moved in to assess damage from fires that had lit up the night sky along the coast on Christmas.

A spokesman for the state’s emergency services said 98 homes had been confirmed burned in the community of Wye River and another 18 in nearby Separation Creek, for a total of 116 in the two townships, located about 120 kilometers (75 miles) southwest of Melbourne.

Top emergency officials warned that dry conditions posed a threat of more fires for the Great Ocean Road area and the rest of Victoria. “This fire doesn’t go away,” Craig Lapsley, the state’s emergency services commissioner, told a news conference.

“We will be back into hot, windy weather in January without a doubt. Everything’s available to burn.”
The Great Ocean Road is one of Australia’s biggest tourist draws with its spectacular scenery and unusual offshore rock formations. It remained mostly closed to traffic on Saturday during what is typically one of its busiest times of the year.

Although an evacuation alert was lifted for the popular tourist town of Lorne and rain overnight had helped the firefighting operation, officials said the situation remained potentially dangerous with many hotspots. Images from the scene showed hillsides charred to the ground all the way down to the coast.

State Premier Daniel Andrews surveyed the area from the air and commended emergency services, noting that there had so far been no loss of life, but he warned that the number of homes destroyed could rise.
Meetings were held on Saturday for hundreds of victims urgently moved out of affected towns on Friday, many spending Christmas night in hurriedly organized shelters.

Andrews said financial grants had already been issued to help those who had lost their homes.
The fires started with a lightning strike on Dec. 19 and, fanned by winds, have burned more than 2,000 hectares.

Walking tracks in the nearby Great Otway National Park have been closed to the public as some of the fires are within the park itself.

The disaster is the latest of a string of bushfires to hit Victoria and other states in recent weeks.
In 2009, Victoria witnessed Australia’s worst ever bushfire disaster, since dubbed “Black Saturday”.