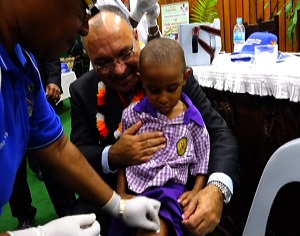 The Minister for Health, Michael Malabag, says that more efforts need to be made to adequately carry out immunisation programs across the country.

He says that access to immunisation in rural areas, particularly for children, has slowed dramatically over the past three years.

Minister Malabag revealed this at the launch of two new vaccines, the Measles Rubella and the Inactivated Polio Vaccine at Parliament’s State Function Room.

“Our mothers and children are the greatest asset but are also the most vulnerable to diseases. This will be the government’s priority to support and carry out the immunisation program to reach our communities”, he said.

Health Secretary Pascoe Kase said more effort is needed to improve access to children in rural communities. Secretary Kase said vaccines like these launched today must be rolled out into all districts, and be made available to all.

The new Measles Rubella will be given to children aged from nine months to 15 years, and the Inactivated Polio vaccine will be for children aged between three and 12 months of age.

The rollout will be in two phases, beginning with the Highlands region, Momase, Islands and then Southern.

Prime Minister Peter O’Neill said the funds are now available and that all districts must ensure these vaccines reach the rural population.

“Health is one out of the five key agendas for the government”, O’Neill said, highlighting the importance of programs such as this.

The Vaccine Alliance Organisation will join efforts with the Health Department, World Health Organisation and other stakeholders to deliver these vaccines throughout the country.

Seafarers recognized for their contribution to the world economy