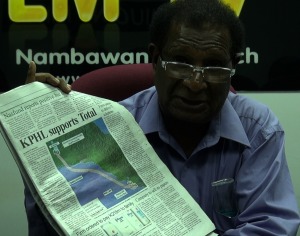 Members of the Gulf Elk-Antelope Bluff Association say there are capabilities for the processing of gas and oil in the province.

Chairman, Tom Toutore, says it is in the best interest of the people and the provincial government for a no pipeline policy.

Toutore says that the national government and developers must work together for the benefit of the resource owners and Gulf’s development.

“It’s for the good of the people that a no pipeline policy be applied to this project in Gulf,” Toutore said.

The group made this call today after a publication in the dailies that the gas and oil will be piped out of Gulf to Caution Bay in Port Moresby.

They say lessons from the PNG LNG project have called for the downstream processing of oil and gas in their province.

Chairman Toutore says the no pipeline policy has been debated and is a concern to all Gulf people.

The group called on KPH Managing Director, Wapu Sonk, to withdraw his statement and share ideas with landowners. The Bluff landowners also called on Petroleum and Energy Minister, Ben Micah, to speed up the vetting process, which has started on a slow note.

Meanwhile, Minister Micah says the department has made directives for officers to process clan vetting in the next three months.

The Elk-Antelope project is the next LNG project in the country.

PNGEC prepares for the judicial recount for Hela Provincial Seat