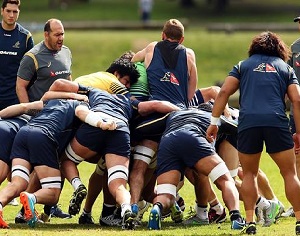 The Australian Wallabies could easily be seen as the rookies of the 2015 Rugby World Cup, with a squad of 13 world cup debutants.

However, under the guidance and leadership of captain Stephen Moore, and with experience coming from fellow three-time world cuppers Adam Ashley-Cooper and Drew Mitchell, the Aussies certainly aren’t lacking depth.

“It is very special, and I feel lucky to have been able to go to three world cups. We’ve done a lot of hard work in our preparations and we’re looking forward to getting to the UK,” said Moore.

While it will be a memorable experience for Moore, much of his off-field duties and focus as captain will be on grounding his teammates, particularly with the enormity of the cup sure to be on their minds.

“The pressure and the people, the press, sponsors and all the extra commitments that we’re going to have when we get there and it is important that we don’t let that effect our preparations.”

Australia’s first game is on Wednesday, September 23 against Fiji in Cardiff, followed by games against England and Wales.

Hela LNG Landowners disappointed with Government over payment and benefits