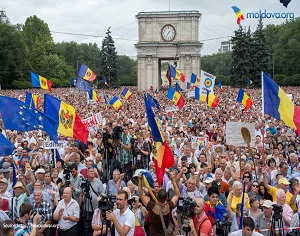 European nation, Moldova, saw clashes erupting with police in its capital city, Chisinau, as thousands of demonstrators gathered to protest against corruption amid the country’s political crisis.

Since September 2015, thousands have regularly turned up to protest at the disappearance of $1 billion from banks in Moldova.

Hundreds of police carrying batons and protective shields formed a barrier between Plahotniuc’s house and the crowd, who were shouting “Down with the mafia” and “Power to the people”. A similar stand-off took place nearby, with crowds throwing stones, sticks, eggs and bottles at police who were protecting a business centre owned by Plahotniuc.

The disappearance of $1 billion from Moldovan banks has led to widespread disenchantment with the ex-Soviet state’s political and business leaders. Insiders say the banking fraud, a steady loss of the equivalent of one-eighth of Moldova’s gross domestic product in unsupported loans over several years, reflects deep-seated corruption.

The appointment of a new prime minister in January with close ties to Vladimir Plahotniuc, one of Moldova’s richest men, has angered opposition lawmakers and citizens, who want a snap parliamentary election.

The demonstration was an offshoot of a larger protest, where 7,000 gathered around government buildings yesterday.

One of the leaders of the protest, Inga Grigoriu, called on demonstrators to rally again this morning with the aim of disrupting the government’s work.

A decision in March to allow the next president to be chosen in national elections rather than a vote in parliament failed to appease protesters.