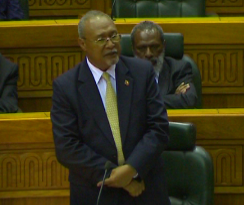 Environment Minister John Pundari will bring forward a bill to turn the department into a Conservation and Environment Authority.

Minister Pundari revealed this in his ministerial statement in parliament yesterday.

This is to ensure it has the funding and staff capabilities to deliver on its functions and responsibilities.

Included in his speech, Mr Pundari has directed the department to prepare a submission to cabinet to establish a trust fund which will operate independent of government.

Many members of parliament welcomed his plans given the resource boom the country and promised to support him.

No Water, No Classes