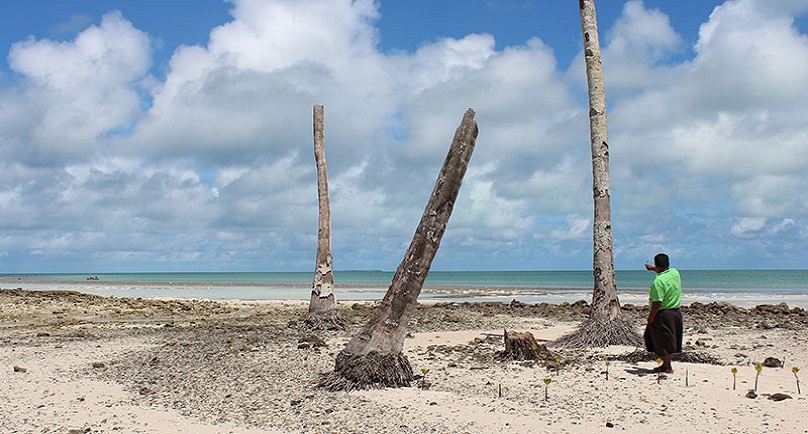 A proposed UN pact to address climate change will come too late for the people of Kiribati.

The nation of 105,000 people, spread out over 32 atolls and reef islands halfway between Hawaii and Australia, has become a poster child for climate change.

Rising only a mere 6ft above sea level, it looks to be the first places that will be consumed by rising sea levels.

In the face of global inaction on cutting emissions, the Kiribati government bought 6,000 acres of land in Fiji last year to help safeguard future food supplies and perhaps to become a home if seas rise, as part of a policy of “migration with dignity”.

The President of the tiny islands, Anote Tong, said the country had already embarked on a plan to evacuate some of Kiribati’s 32 atolls, adding: “We don’t have a lot of options.”

Through the duress, the government will focus on education and vocational training in order to provide people with the skills and opportunities to migrate and work abroad.

Migration with Dignity is based upon the idea that through the acquisition of new skills, I-Kiribati (a term used to refer to the people of Kiribati) migrants will be able to enter the competitive global marketplace and become eligible for certain visa categories as assets to potential receiving countries.

The program’s goal is for the people of Kiribati to migrate willingly over the long-term.

Leaving home isn’t the desire of most I-Kiribati, a survey carried out in 2011 showed that a majority would prefer to stay – but because they eventually will not have a choice, Tong’s program aims to create migrants before they become displaced peoples.

Formula One set for qualifying change

Despite traumas of war, Syrian children in Turkey dream of home