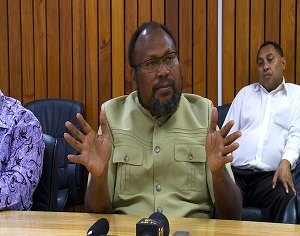 Member for Kavieng Open and Public Enterprise and State Investments Minister, Ben Micah has taken to the media to address his referral by the Ombudsman Commission, on his alleged “misconduct of office” charges.

Mr Micah, who is also the leader of the People’s Progress Party, told the media that he respects the roles and functions of the Ombudsman Commission and does not question the manner in which investigations are conducted; however, he is adamant to fight the allegations made against him, to prove his innocence.

The member was referred to the public prosecutor on the 9th of March by the Ombudsman Commission for alleged misconduct in office.The charges laid against him are;

* Allegedly interfering with the board of PNG Power Limited in the administration of the state-owned enterprise, failing to comply with the directions of the Ombudsman Commission, directing him to not interfere with the control;

* Allegedly using his office for personal benefit despite advice from the Board; the leader allegedly continued to occupy a unit at the Grand Papua Hotel at the cost of K3,080 per day at the expense of the Independent Public Business Corporation;

Mr Micah said he was out of the country when his referral was announced; however, he says he is prepared to go all the way to fight for his integrity as state minister and leader of his people.

Meanwhile, the People’s Progress Party has resolved that Minister Micah will remain as party leader amidst his referral, while due process is allowed to take its course.

In a media statement released on the 17 March 2015, Deputy Party Leader of PPP and Milne Bay Governor, Titus Philemon and Party President, Brown Sinamoi, announced that the party has considered the referral and have taken the position that it is of administrative nature.

The party leaders say they do not consider Minister Micah’s actions to have compromised his integrity as a leader and have appealed to party supporters and members to remain calm and be assured that there is nothing of criminal or of fraudulent nature in the referral.

The referral is now before the public prosecutor, who will be perusing the files provided by the Ombudsman Commission to determine whether there is sufficient, credible and cogent evidence to request a Leadership Tribunal hearing.

Surfing PNG on a brink of Success