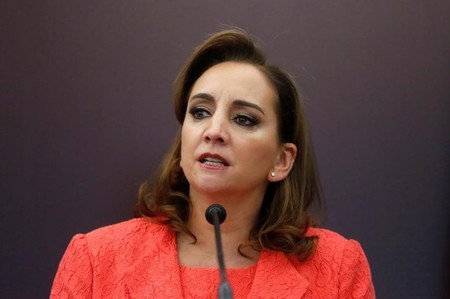 WASHINGTON (Reuters) – Mexico’s foreign minister mounted a robust defence of her nation’s economic importance to the United States on Monday and condemned anti-migrant rhetoric and a “climate of intolerance” in its neighbour — a thinly-veiled critique of Donald Trump.

Without naming the presumptive Republican presidential nominee, Mexican Foreign Minister Claudia Ruiz Massieu rebutted many of his arguments in a detailed explanation of how integration of the U.S. and Mexican economies has benefited both nations.

Trump has raised hackles in Mexico with a string of proposals, including threats to build a border wall to keep out migrants, blocking remittances sent home by Mexican workers, and unpicking the 1994 North American Free Trade Agreement between Mexico, Canada and the United States to protect U.S. jobs.

Many Mexicans feel their government has not done enough to counter Trump’s arguments, particularly in the United States, and Ruiz Massieu’s speech to the American Jewish Committee in Washington was an appeal to both solidarity and self-interest.

“We live in a world in which no country can face the big economic challenges of the 21st century alone,” she said according to the Spanish text of the speech.

“This is why we believe one of the best ways for the United States to maintain and increase its global competitiveness is by consolidating and expanding trade, investment, cooperation and its integrated value chains with Mexico,” she added.

U.S.-Mexico trade is worth some $500 billion every year and the U.S. Chamber of Commerce says roughly 6 million American jobs depend on it. Moreover, an estimated 35 million people in the United States are Mexican or of Mexican background.

Underlining economic integration, Ruiz Massieu said about 40 percent of the content of Mexican export goods is of U.S. origin, and that Mexican outward investment in the U.S. had jumped 35 percent in the last five years to reach $17.6 billion.

Ruiz Massieu said Mexico “did not steal jobs” from U.S. companies and decried the “climate of intolerance” in the United States that was sending out a message of “Mexicans go home”.

“Those who attempt to make political gains by stigmatizing these people, be they Mexicans, Jews, Muslims, people of colour, (or) Asians, are wrong,” she said.

Trump has floated the idea of a temporary ban on Muslims entering the United States and also attacked China over trade.

As COVID Cases Hit Record High in Tokyo, Can the Olympic Bubble Hold?