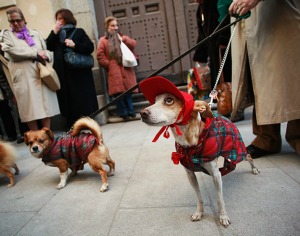 It is not common for us to hear of pets being brought to the altar for blessing.

Recently in Mexico, Catholics brought their beloved animal companions to church to be splashed with holy water for blessing.

The tradition of blessing pets dates back to colonial times. Catholic animal lovers in Mexico brought their pets to the San Bernardino church on St. Anthony’s Day for blessing and to rid any danger or misfortune.

St Anthony was born in to wealth and Christianity. It is believed he lost both his parents at an early age. Rejecting the luxury his heritage offered, he gave his riches to the poor and pursued solidarity and spiritual enlightenment in the company of animals.

January 17 marks the anniversary of the death of St. Anthony.

Parishioners also take this time to spend with their furry – or sometimes feathered animal companions.

The old-age Catholic tradition was brought to Mexico during the Spanish colonial rule in the 1500s and has been embraced by many animal lovers in Mexico, due to the prominence of farmhouses in the area.