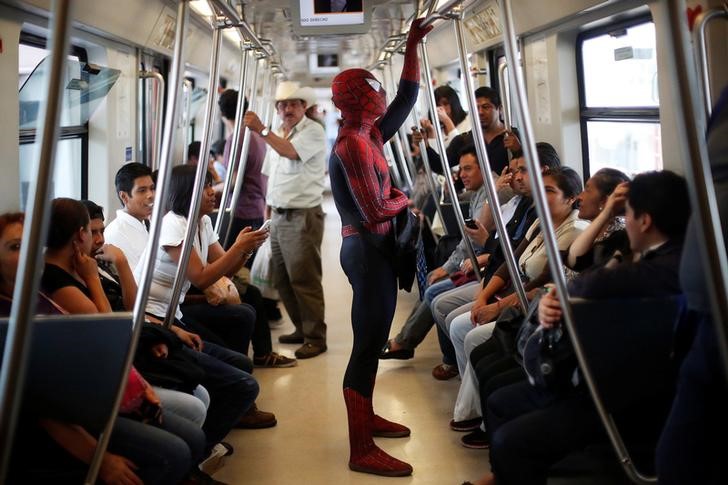 Image: Moises Vazquez, 26, known as Spider-Moy, a computer science teaching assistant at the Faculty of Science of the National Autonomous University of Mexico (UNAM), who teaches dressed as a comic superhero Spider-Man, travels on a subway on his way to work in Mexico City, Mexico, May 27, 2016. REUTERS/Edgard Garrido

MEXICO CITY (Reuters) – A Mexican science teacher has come up with a novel way to get his students’ attention – giving lessons dressed as Spider-Man.

Moises Vazquez, 26, said he was inspired to pull on the tight blue and red suit of the superhero after reading in comics that the Marvel character behind the mask, Peter Parker, worked as a science teacher after his time as a freelance photographer.

“I do the same job as anyone else, I don’t think it’s the best class in the world just because I put on a suit. But I assure you I want to be the most honest and dedicated there is, I just want to make the classroom a better place,” he said.

When giving class at the National Autonomous University of Mexico as the superhero, Vazquez leaves home in eastern Mexico City with his mother’s blessing, and rides in public transport to the prestigious seat of learning dressed as the Avenger.

Vazquez’s family originally thought that pretending to be Spider-Man could hurt his career when he started donning the suit for class a year and a half ago – but instead the unusual turn has gone down well with students and other teachers, he said.

“Obviously they reacted with surprise, but they were happy too,” Vazquez added. “Everyone was smiling at me.”

On the streets of the megalopolis, people are generally surprised to learn the Mexican superhero is a university lecturer, assuming that his outfit is part of a film shoot.