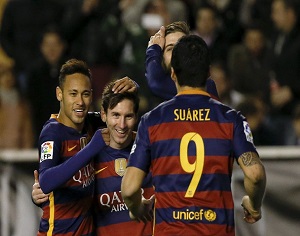 MADRID (Reuters) – Barcelona set a Spanish record of 35 matches unbeaten in all competitions with a 5-1 win at nine-man Rayo Vallecano in La Liga on Thursday after Lionel Messi scored his 35th hat-trick.

Ivan Rakitic opened the scoring, Messi caught up with Real Madrid’s Cristiano Ronaldo on 35 trebles in all competitions and Arda Turan completed the rout with Turkey’s captain scoring his first goal for the club since joining from Atletico Madrid.

Rayo defender Diego Llorente was sent off three minutes before halftime for a foul on Rakitic and Manuel Iturra followed in the 67th for bringing down Sergio Busquets in the poenalty area, although Luis Suarez’s penalty was saved by Juan Carlos.

Barca’s victory, which saw them beat the undefeated record Real Madrid had held since the 1988/89 season, restored an eight-point lead at the top over Atletico with 11 matches to go.

Atletico beat visiting Real Sociedad 3-0 on Tuesday, while third-placed Real Madrid are again 12 points off the pace after a 3-1 win at Levante on Wednesday.