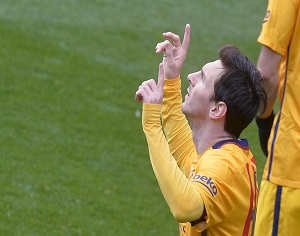 MADRID (Reuters) – Lionel Messi’s double helped Barcelona secure a 4-0 victory at Eibar in La Liga on Sunday that kept them eight points clear at the top and brought up 100 goals for their lethal strikeforce.

Munir El Haddadi, standing in for the suspended Neymar, tapped in the first goal for the Catalans early on before Messi’s brace, while Luis Suarez completed the rout.

Barca’s lethal attacking trio of Messi (35 goals), Suarez (42) and Neymar (23) have scored a century of goals in all competitions this season.

Barcelona have 72 points ahead of Atletico on 64 and Real Madrid, who romped to a 7-1 win at home to Celta Vigo helped by four goals from Cristiano Ronaldo on Saturday, trail on 60.

Messi’s first was a fine solo effort, while his second came from the penalty spot as Barcelona maintained their advantage over second-placed Atletico Madrid, who won 3-1 at Valencia.

Barca extended their Spanish record unbeaten run to 36 games, which includes 30 wins. They have not lost since Oct. 3.

“The team are looking good and not losing their ambition. When these players are in such form it’s very hard to stop them,” said Barcelona coach Luis Enrique, before sounding a warning that the title race is not over.

“No-one can be sure we’ll be in this form in the next match,” he told reporters.

“There are still 30 points left (to play for). We won’t let ourselves be distracted by being called champions before time. You win this (league) when mathematically there are no more points.”

Barcelona went in front in the eighth minute when Messi lifted a perfect pass forward to Suarez, who crossed from the right to the far post for Munir to tap in.

Messi added the second three minutes before halftime after running from the centre circle and ignoring the strikers either side of him who stretched the defence wide.

The Argentina captain made it 3-0 when he dinked a 76th-minute penalty, awarded for handball by Ivan Ramis, past goalkeeper Asier Riesgo for his 21st La Liga strike.

Messi is six league goals behind Ronaldo and five short of Suarez, who scored Barca’s fourth when he shot past Riesgo from a narrow angle six minutes from time after knocking the ball through the legs of Ander Capa.

At the Mestalla, Antoine Griezmann put Atletico in front against mid-table Valencia after 24 minutes with a shot from outside the box for his 15th league goal.

The hosts equalised in the 28th when Denis Cheryshev fired past Jan Oblak after Paco Alcacer laid the ball off superbly with his head.

Fernando Torres, unmarked on the left, tucked the ball away in the 72nd, after a corner from the right was headed towards the far post, for his 102nd goal in 300 matches for Atletico.

As the visitors increased their grip, Valencia defender Aderlan Santos was sent off for a second booking in the 80th minute after a foul on Torres before Yannick Carrasco wrapped up the points in the 85th.