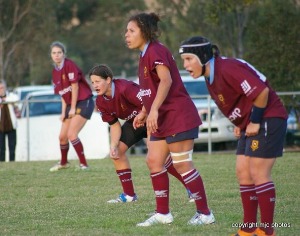 While we often look to many outside our country for inspiration, there’s one woman who has slipped under the radar and shunned away from the publicity.

Melanie Kawa not only carries the pride of PNG overseas, but has set the benchmark and guidelines for women’s rugby in PNG.

She was born in Mendi, in the Highlands of Papua New Guinea and has spent much of her adulthood abroad, but the 28-year-old has been a superstar for women’s rugby in Australia.

As well as this, she has gone on to become the first woman to play professional rugby in Europe’s elite competition.

Her rugby career began in 2006, when she debuted for Brisbane’s premier rugby club, UQ Rugby.

She has since represented Queensland at the 2013 National Championships and been a regular selection for representative rugby in Queensland and Australia.

“I feel very lucky to have the opportunity to play in an elite national competition such as the French Top 8,” says Kawa.

“Every week I’m playing with some of the world’s best international female players, including many girls on the current French national team, so it’s a great privilege.”

Kawa hopes to learn as much as she can while in France, and inspire many more women throughout PNG to chase their dreams.

“I hope to learn as much as possible from my time here, and create some opportunities for other aspiring rugby players from Australia and PNG.”