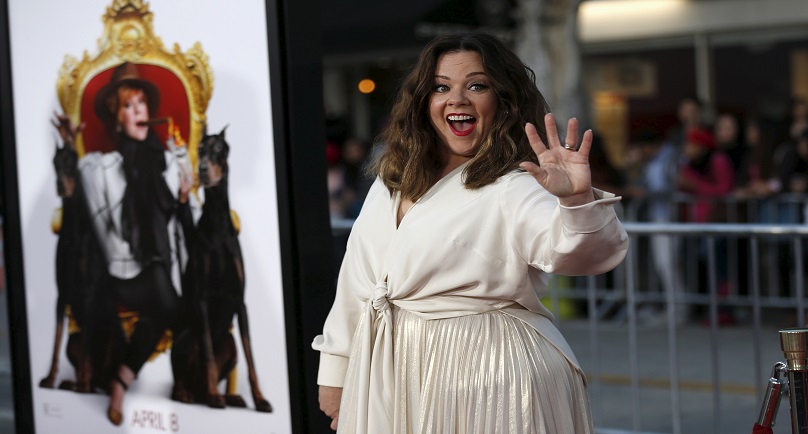 If those projections hold, it will be enough to narrowly topple &ldquo”Batman v Superman” Dawn of Justice” from first place at the weekend box office. As it’stands, the superhero match-up fell just short of retaining the top slot, earning $23.4 million and bringing its total after three weeks to $296.7 million. Given that this is essentially a statistical dead heat, it is possible that those positions could shift once final numbers roll in on Monday morning.

With “Spy,” “Identity Thief” and now &ldquo”The Boss”” McCarthy has become one of the most reliable comic draws in the movie business.

“She has a hot streak going like no other comedian, male or female, working today,” said Jeff Bock, an analyst with Exhibitor Relations. “You have to consider the lineage of Eddie Murphy in the ’80s, Jim Carrey in the ’90s and Adam Sandler in the aughts. She is their heir apparent.”

Despite McCarthy’s popularity, &ldquo”The Boss”rdquo; could have trouble showing endurance. The film’s middling C+ CinemaScore signals that audiences agree with critics that the picture is flawed. The film is a collaboration between McCarthy and her husband, the director and co-writer Ben Falcone, who previously teamed on 2014’s “Tammy.” It centers on a business icon who is brought low after she is convicted of insider trading. Universal distributed the $29 million production across 3,480 theaters.

McCarthy is the film’s big draw, with 76% of ticket buyers surveyed reporting that they turned out to see the comedian. Women comprised 67% of the audience, with 51% of the opening crowd clocking in over the age of 35.

“She is absolutely a bankable movie star,” said Nick Carpou, president of domestic distribution at Universal. “It’s another number one opening for her.”

The weekend’s other new release, STX Entertainment’s “Hardcore Henry,” struggled to break through, earning a feeble $5.1 million from 3,015 theaters for a fifth place finish. The studio acquired the point-of-view thriller in a bidding war at last year’s Toronto Film Festival, paying a reported $10 million for the rights. The opening weekend crowd drew heavily from the gamer set, with 72% of ticket buyers saying they played first-person shooter video games such as “Call of Duty” and “Halo.”

&ldquo”Batman v Superman”rdquo; has been something of a disappointment, given that it is likely to fall short of hitting $1 billion globally — the line that truly elite blockbusters have to cross to join a rarefied club. However, it has done better than some major comic-book movies. This weekend, it eclipsed “Man of Steel” ($291 million) on a domestic basis and it’should pass $300 million stateside at some point this week.

Whatever the final outcome, neither &ldquo”The Boss”rdquo; nor &ldquo”Batman v Superman”rdquo; seem likely to extend their rule into next weekend. That’s when Disney releases a live-action version of “The Jungle Book.” Bolstered by good notices and Disney’s marketing prowess, the fresh spin on Rudyard Kipling’s story of the man cub, should hum “The Bear Necessities” all the way to the bank.