A report by the World Wildlife Fund (WWF) into the seas around Melanesian has calculated that its Gross Marine Product is equivalent to the combined economies of Fiji and the Solomon Islands and argues it requires special stewardship. An Asian Development Bank (ADB) report points to particular issues in tuna fishing. 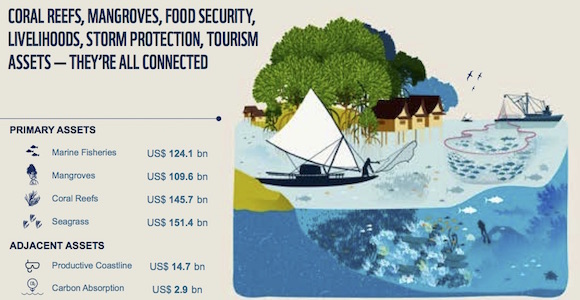 The WWF report found that Melanesia’s ocean assets are worth a minimum or US$548 billion (K1.736 trillion). This estimate includes fisheries and marine habitats, as well as services such as coastlines and carbon absorption.

The report estimates that the annual ‘Gross Marine Product’ of the Melanesian region (an equivalent of a country’s annual gross domestic product) is worth at least US$5.4 billion (K17.1 billion). This makes it the third largest ‘economy’ in the region.

‘It is time to reset the agenda before this ocean capital base collapses.’

‘The ocean can be seen as a “shared wealth fund”, with the principal capital of the Melanesian region being eroded at a rate that undermines the ocean’s value for current and future generations,’ the report says. 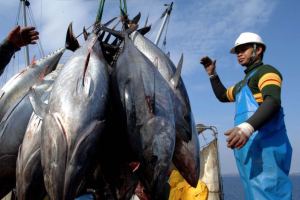 The WWF report assesses the economic value by aggregating the primary assets of the ocean: marine fisheries, mangroves, coral reefs and seagrass. It then added adjacent or ancillary assets: productive coastlines (focused on tourism) and carbon absorption.

‘It is time to reset the agenda before this ocean capital base collapses,’ the report says.

‘The good news is that rapid action on a number of key issues will deliver benefits  for ocean systems and the people who depend on them.

‘Some of the benefits could be reinstated in a relatively short period of time.’

‘Fishing requires very little initial investment and training and it cannot easily be substituted by other sources of income or food.’

The report lists ‘essential actions’ to protect the ocean assets. They include creating roadmaps and spatial planning and eco-system based approaches to resource based management.

The WWF report says the actual value may be considerably higher than indicated by the economic statistics. It says fishing helps people maintain a stable source of income independent of market uncertainty, and ‘is an important factor in social cohesion.’

The report notes that fishing requires very little initial investment and training and it cannot easily be substituted by other sources of income or food.

‘Increasing productivity in the fisheries sector ‘could help boost jobs’ in PNG.’

‘The value that local communities attribute to money, and its function in life, differs widely from common economic assumptions.

‘For example, island societies assign value to items that lack exchange equivalents, or relative prices, and which therefore are difficult to include in a classical economic evaluation.’ 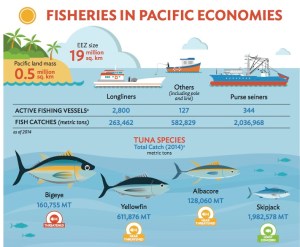 Vessels and tuna species in the Pacific Source: ADB

Meanwhile, a recent report by the ADB says catch rates of some varieties of tuna would have to fall by over half to remain sustainable. The report adds that increasing productivity in the fisheries sector ‘could help boost jobs’ in PNG.

According to the ADB, the annual tuna fisheries catch in the Western and Central Pacific Ocean averaged 2.7 million metric tons, valued at US$6.1 billion (K19.3 billion) over 2011–2015.

Of this, around 1.6 million metric tons, worth US$3.1 billion (K9.8 billion), was taken in exclusive economic zones (EEZs) of the Pacific Island Forum Fisheries Agency (FFA) members.

One area of particular concern is albacore, a type of tuna. ‘For a number of years, Pacific fisheries ministers have called for urgent action to address the depletion of the south Pacific albacore stock, which makes up around 55–60 per cent of the catch taken in the southern long line fishery,’ the report says.

‘Declining catch rates reduce the viability of domestic fleets, and the ability of Pacific Island Countries to levy access fees on foreign vessels.’

‘Despite efforts to implement tighter management through the Western and Central Pacific Fisheries Commission (WPCFC), effort in the southern longline fishery has continued to grow, depleting stocks of albacore tuna such that catch rates are often below economically viable levels for many Pacific island domestic vessels.

‘Since 2011, persistently low catch rates have resulted in poor economic conditions for the southern longline fishery and forced Pacific island vessels to tie up for extended periods or to exit the fishery.

‘While the albacore stock is currently biologically healthy, if recent effort levels are maintained the size of the stock will continue to decline as will catch rates.’

‘If vessels can easily shift their fishing activity elsewhere, or the rights created are freely available to any vessel that seeks them, the system will fail,’ the report says.

It argues that to make a rights based system work there needs to be ‘a high level of regional cooperation and shared policy development.’

All Provinces to have Provincial Health Authority