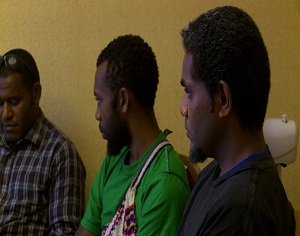 Students at the University of Papua New Guinea (UPNG) School of Medicine and Health Sciences say they want to return to class.

They appeal to the University’s Council to consider their request.

The appeal was made today after the University Council announced an indefinite closure of the school and gave the students yesterday 48 hours to vacate the premises.

This comes following four weeks of protest by the students.

The students demanded Prime Minister, Peter O’Neill, to step aside and allow investigations into various  allegations of corruption against him, to be investigated, including the controversial UBS loan and the Paul Paraka legal bill payment.

But the surprise notice yesterday by UPNG Council to suspend the first semester and demanded students out of the campus has not gone down well with the Medical students at the Taurama Campus.

Five students who spoke out, say they want to return to class but were prevented to express their rights during the protest.

Mr Mongolop said this will affect not only their medical attachment but also have a big impact on their trimester and Block practice.

Self-sponsored students pay a school fee of up to K10,500 each year and the academic year starts from mid-January and ends in November.

Readjusting the academic calendar will be difficult and the Medical students appeal for a special consideration to be given to them to go back to class tomorrow.